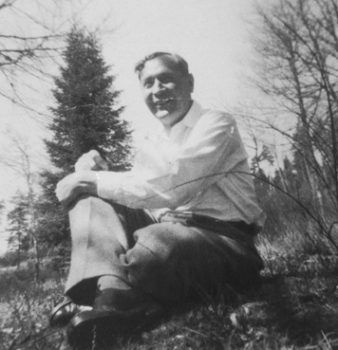 Le Chambon-sur-Lignon, France… 1942 – When Germany occupied France in 1940, the Vichy regime (the pro-Nazi regime that governed France during the war) took power and began persecuting Jews in France.  Many residents of Le Chambon-sur-Lignon decided to take a stand against this persecution by providing Jews with shelter and aid.

Protestant Minister Edouard Theis, leader of the Collège Cévenol, a protestant church in Le Chambon-sur-Lignon, saw the need for strong leadership to motivate this righteous behavior.  He encouraged his congregants to aid Jews, asking them to “…do the will of God, not of men.”  Pastor Theis and his wife also made their home available as a safe house, where they hid Jewish families temporarily until they could find the families permanent hiding places.

Eventually, Pastor Theis was arrested, along with Pastor André Trocmé and Roger Darcissac.  He was imprisoned for four weeks at the Saint-Paul d’Eyjeaux camp. During his time there, he refused to capitulate to the police and reveal any knowledge of hidden Jews.  When he was finally released, he joined the underground CIMADE network, which helped Jews escape to Switzerland.