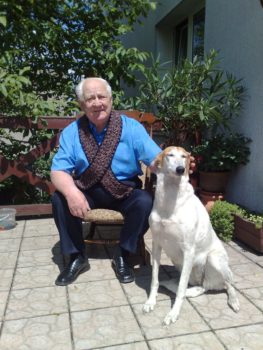 In the winter of 2011, The Jewish Foundation for the Righteous (JFR) launched a Charity Knitting Project for volunteers to knit and crochet scarves for rescuers supported by the JFR.  Nothing could have prepared us for the response that we received! More than 1,600 scarves and hats were sent to our beloved rescuers! As a result, all of our rescuers have received a homemade scarf and wore it during those cold Eastern European winters. We are very grateful for the generosity and support of our donors, and we thank you for helping the JFR carry out its mission.

While the Charity Knitting Project has ended, to see photos of the rescuers wearing their scarves, please like us on Facebook at The Jewish Foundation for the Righteous and click on the Rescuer Photo Album.