The JFR sent funds to all rescuers in Ukraine prior to the invasion of Ukraine on February 24. After the invasion, we began sending emergency awards to rescuers in Ukraine. We are contacting each rescuer to see how they are doing. We would like to thank our volunteer Russian translators who responded to our request for help in last month’s eNewsletter!

While most of the rescuers are unable to evacuate due to age and health, if their children or grandchildren leave the country, we are asking them to let us know where their children are going. We are also suggesting that children and grandchildren of rescuers who are leaving Ukraine make a copy of their parents/grandparents Yad Vashem diploma. Upon arrival in another country they should try to reach a Jewish humanitarian organization, such as the JDC, HIAS, or IsraAID, who are on the ground, to show them the Yad Vashem diploma. Yad Vashem diplomas are written in Hebrew and usually the language of the rescuer’s country.

In February and March, awards were sent to all JFR supported Righteous living in 14 countries. The JFR Board of Trustees approved a $50 increase in our monthly awards. This increase was effective January 1, 2022, bringing each monthly award to $250.

The rescuers are so appreciative that we have remembered them and are taking care of them during this time. They are sending emails, through their children and grandchildren thanking the JFR and each of you for the funds that they receive. They send their good wishes!

On behalf of the rescuers, we at the JFR thank you as well for making their lives so much better and brighter. Please click here to read the notes from the rescuers.

Due to the conflict in Ukraine, coupled with the concern about a potential spike in COVID, a decision has reluctantly been made to not hold the 2022 European Study Program. It is our intention to hold the program in July 2023.  Professor Robert Jan van Pelt will be our scholar in residence. If you are interested in joining us in July 2023, please email Stanlee at [email protected].

We are looking forward to meeting our 2022 Alfred Lerner Fellows in person this June at the Hilton Newark Airport! The text for the Summer Institute, How Was it Possible? A Holocaust Reader, will be mailed in April to our 2022 Lerner Fellows.

We will be meeting our new Lerner Fellows via zoom the week of April 18, 2022.

A screenshot of some of the 2021 Summer Institute for Teachers participants.
Leonia, Stanislaw, and Helena Weglowski

We hope you find this year’s Haggadah supplement a welcome addition to your Seder.

JFR’s traveling exhibit, Whoever Saves a Single Life…Rescuers of Jews During the Holocaust, rescue opens at Ahavath Achim Synagogue in Atlanta, GA on April 10, 2022.  If you are in the Atlanta, GA area, please consider viewing the exhibit.  Please call the synagogue first for days and hours when the exhibit can be viewed.  For more information about seeing the exhibit, please contact Ms. Jill Rosner, at 404.603.5741.

Bogdan Szymanski with his wife and son on his 80th birthday.
One of the small gifts we received from Bogdan over the years.

Bogdan Szymanksi, a Righteous Gentile from Poland, passed away on February 28, 2022, at the age of 88.

Bogdan always remembered the JFR at every holiday and sent us cards and thank you notes after every transfer. 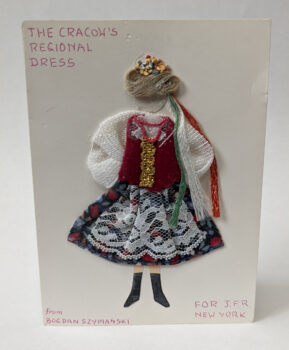