The JFR held its annual luncheon for JFR-supported rescuers living in Warsaw, Poland, on Sunday, September 8, 2019.  The luncheon was held at POLIN – The Museum of the History of Polish Jews.

Each rescuer was invited to bring a guest.  Many of the rescuers brought their children and grandchildren.  Stanlee Stahl, JFR Executive Vice President, welcomed everyone.  Israel’s new ambassador to Poland, Alexander Ben-Zvi, gave remarks as did Bix Aliu, Charge d’Affaires, from the U.S. Embassy in Poland.

It was a wonderful afternoon.  For the rescuers, it meant that they were able to get out and be recognized for their noble deeds during the Holocaust.  For the JFR, we were able to see old friends and to catch up on how everyone is doing.  Some 80 people attended the luncheon.

The JFR has been hosting a luncheon for rescuers living in Warsaw for the past eleven years.  During the luncheon we celebrated the birthdays of two rescuers – Jozef Walaszczyk will turn 100 in November and Alicja Schnepf just turned 89.  Alicja Schnepf attended the luncheon with her son, Ryszard Schnepf, Poland’s former ambassador to the United States.  The JFR provided each rescuer with funds to cover the cost of a taxi to and from the luncheon.

Click here to see the photos from the luncheon.

At the luncheon, Rabbi Michael Schudrich, the Chief Rabbi of Poland, and Stanlee Stahl announced that the JFR would be giving the newly established Warsaw Kosher Food Pantry funds enabling the Food Pantry to provide each Righteous in Warsaw with a monthly food package. The food package will consist of non-perishable items.  The Righteous attending the luncheon were delighted to hear this news.  Extra food parcels will be provided to the Righteous for Christmas and Easter.

Since 2002, more than 50 outstanding educators from Poland have attended the Summer Institute for Teachers.  The U.S. Embassy in Warsaw covers the airfare and the JFR provides a full scholarship for the teacher to attend the Summer Institute for Teachers.  All JFR Polish Alfred Lerner Fellows were invited to the luncheon.  This year four Lerner Fellows were able to attend – Irena Wojtowicz, Zygmunt Kawecki, Aneta Brzezinska-Leszczyk, and Renata Mansili. It was wonderful to see everyone and to reconnect!

The JFR mourns the passing of Franciszek Paslawski, a Righteous Gentile living in Ontario, Canada. Below is the death notice we received from his family. 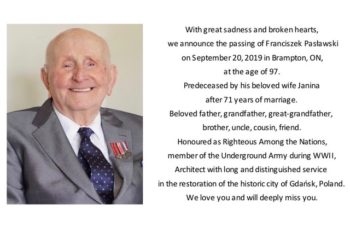 Consider bringing the JFR’s traveling exhibit Whoever Saves a Single Life…Rescuers of Jews During the Holocaust, to your community please e-mail Stanlee Stahl at [email protected].  The exhibit opened at the United Nations. The exhibit is perfect for small venues and is appropriate for many community venues, e.g., libraries, community colleges, museums. Click here for more information on the exhibit.

PROBLEMS WITH OUR TELPEHONE NUMBER