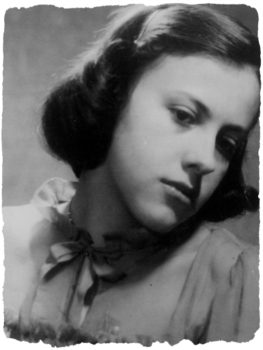 Prague, Protectorate of Bohemia and Moravia… 1942 — After finishing school, Alena Divisova and Charlotte Bloch-Kostenbaum worked as apprentices in a dressmaker’s shop in Prague, Protectorate of Bohemia and Moravia (now the Czech Republic). Charlotte was active in a Zionist youth group and was planning to immigrate to Palestine. Through Charlotte, Alena became friends with many young Jewish people. In 1942 nine of her Jewish friends decided not to report for deportation, but rather to go into hiding or pass as Christians.

Alena provided false identity documents to Charlotte and her friends so that they would be able to walk freely, work “legally,” and be eligible to receive food rations. On several occasions, Alena snuck into the Theresienstadt ghetto to deliver food.

In the fall of 1943, Ernst Kruh, one of the nine who did not report for deportation, returned to Prague from Berlin. He brought Josef Matejicek, a friend he had met in Berlin whom the Gestapo had been looking for since 1939. Alena hid the two men for several months. Somehow the authorities learned of Alena’s aid to Josef and arrested her on March 28, 1944. She was detained in the Pankrác prison in Prague and then the Small Fortress in Terezin; she was subsequently deported to Ravensbrück and from there to Altenburg.  She managed to escape from a death march and returned to her home in June 1945.

Meanwhile, Erna Friesova, another of Alena’s nine friends, and three other Jewish girls escaped from a transport and traveled back to Prague. Alena’s parents hid the four girls in their weekend hut on the outskirts of Prague.  Of the nine Jewish friends, two died in Auschwitz.  The other seven survived the war.

Alena Divisova passed away in August 2012.