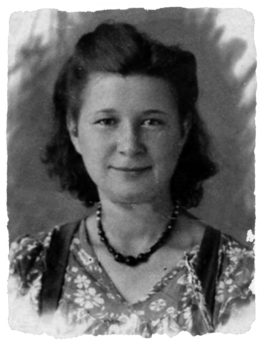 Kiev, Ukraine… Fall 1941 – Yakov Lysyi was a thirty-five year old physician at a hospital in Kiev. After Germany invaded the Soviet Union on June 22, 1941, Yakov was conscripted into the Soviet army. In September 1941, Yakov was captured by the Germans and put in a POW camp. He managed to escape before his Jewish identity was discovered.

On September 29, 1941, the Jews of Kiev were ordered to assemble at a designated spot.  From there they were marched to Babi Yar, a ravine located at the outskirts of Kiev, where they were murdered, including most of Yakov’s family.

Upon returning to Kiev, Yakov learned of the murder of his mother, Rebeka, at Babi Yar. He knew in order to survive he had to go into hiding.  Yakov sought out Natalya Dorotsenkovskaya, a woman he knew from before the war, and asked her to hide him. Natalya, her three teen-aged daughters, Galina, Yelena, and Nina, and three-year-old son, Alyosha, welcomed Yakov into their home. The Dorotsenkovsky family built a hiding place for Yakov in the kitchen, behind the cupboard. Natalya’s husband, Aleksey, returned home from the army later that year and supported his family’s decision to protect Yakov.

The Dorotsenkovsky family had very little food, and had to sell their belongings in order to survive. When they ran out of things to sell, Nina and her sisters learned how to make soap. They would work for hours making soap so they could either barter the soap for food or sell the soap to purchase bread and potatoes. This kept the Dorotsenkovsky family and Yakov from starving. Nina and her sisters brought Yakov food, took away his body waste, and cared for him.

When emergency medical assistance was needed, Natalya would sneak Yakov out so he could provide the necessary care. On one such mission, Natalya and Yakov were spotted on their way to a medical emergency and were denounced. The next day the Gestapo searched their home, but Yakov’s hiding place was not discovered. Yakov stayed with the Dorotsenkovsky family for more than two years until the Soviet army liberated Kiev on November 6, 1943. Yakov remained close friends with the Dorotsenkovsky family until his death in 1980.