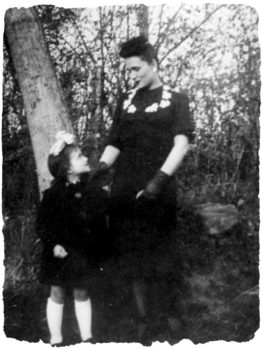 Pau Basse Pyrenees, France… September1942 – “My family was on the St. Louis, that doomed ship that no country seemed to want.  We made our way to southern France, like so many refugees from Germany.  We were from Berlin.

“In May 1939, my mother and father rented a small apartment in the home of Eliette Carapezzi Enard.  In August1942, my parents and I were arrested and taken to Gurs camp.  The Oeuvre de Secours aux Enfants (OSE), the main Jewish organization working to safeguard children in France, was operating in Gurs.  The OSE would take children out of the camp and place them in convents and homes throughout the region, passing them off as Christians.

“I was taken out of Gurs and placed with the Enards.  I was so sick and malnourished.  My French mother, Eliette, nursed my wounds and brought me back to health.  I lived in a very loving atmosphere for four years as a member of their family.  My parents died in Auschwitz in 1942.

“In 1946, Eliette took me to Paris where she gave me to the OSE, which arranged to send me to the United States to live with my aunt and uncle in New York City.”

This was the testimony given by Judith Koeppel Steel, the little girl saved by Eliette Carapezzi Enard.