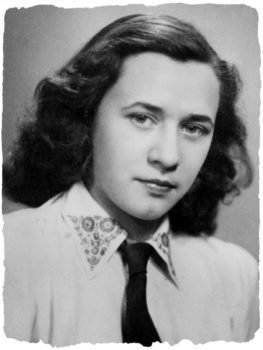 Budapest, Hungary… March 1944 – When the Germans occupied Hungary in March 1944, Susanne Jakob and her family were forced to move into special “Jewish houses” with several other Jewish families. Before the occupation, Susanne went to school with Maria and Zsuzsa Farkas and often visited the Farkas family. Although, their parents were not friends, as the persecution of the Jews escalated, the relationship between the Jakob and Farkas families grew.

The Jews were forced to abide by strict curfew laws and were not able to leave the house. The Farkas family loaned the Jakobs their own identity documents so that Dr. Jakob could leave the house and obtain a Schutzpass (a protective passport) for his family. Shortly thereafter, Dr. Jakob was deported to a labor camp. Mr. Farkas smuggled food, cigarettes, and identity papers into the camp for Dr. Jakob and other Jews. Eventually, Dr. Jakob managed to return to his family in Budapest.

During this time, the Germans and their Hungarian collaborators rounded up and deported non-Jewish civilians to perform forced labor in Germany. The day after he arrived home, Dr. Jakob and Susanne, his daughter, despite having false documents, were among those rounded up to be sent to forced labor camps in Germany. Mrs. Jakob was not picked up with her husband and daughter, and she remained in Budapest. On the way to Germany, Dr. Jakob sent word to Mr. Farkas asking him to find a hiding place for himself and Susanne if they were able to escape. Mr. Farkas sent a message back to Dr. Jakob offering his home.

Dr. Jakob and Susanne escaped and returned to the Farkas home in Budapest. At that time, the Farkas family was already hiding two other Jewish women. Maria Farkas gave her mother’s identity documents to Mrs. Jakob, enabling her to make it safely across Budapest to the Farkas home. These five Jews lived with the Farkas family until the city was liberated in January 1945. Maria and Zsuzsa provided food for the five Jews in hiding and stood guard should a neighbor visit.