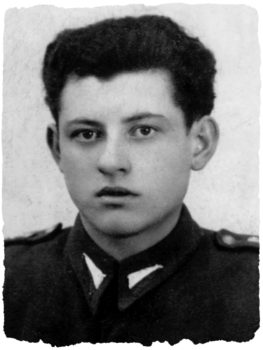 Ostra Mogila, Poland… September 1942 – Joseph and Joan Bonder were teenagers and lived with their parents in the village of Faszczowka, Poland (now Ukraine), when it was occupied by the Soviet Union in September 1939. With the Soviet occupation, Joan sought a teaching job. She traveled to the remote village of Ostra Mogila where she became the village teacher. She rented a room from the aunt of one of her students, Bronislaw Firuta. Joan’s younger brother, Joseph, came on the weekends to visit his sister and befriended twelve-year-old Bronislaw and his family.

When the Germans invaded the Soviet Union on June 22, 1941, life changed. The school in Ostra Mogila was closed and Joan dismissed. She returned to her parents’ home in Faszczowka. The Bonders were the only Jewish family in Faszczowka. In the fall of 1942, the Bonders were ordered to move to the Skalat ghetto. Once the Bonders reached the Skalat ghetto, Joan and Joseph’s parents, realizing what lay in store for their family, decided that their children must escape from the ghetto. They told Joan and Joseph, “Go to the Firutas … they are good people and will help you.”

Joan and Joseph escaped from the Skalat ghetto and made their way to Ostra Mogila. They went to Bronislaw’s aunt’s house, where Joan had rented a room when she was a teacher there. They stayed in the home of Bronislaw’s aunt for a short time and then moved to Bronislaw’s home. The Firuta family hid the two Jewish teenagers from fall 1942 until 1944. In the spring and summertime, they hid in the straw, and in the winter remained hidden in the barn and inside the house. The Firutas provided not only shelter and food, but also friendship and hope.

When the situation became too dangerous to remain at the Firuta home, the Bonders would go to the nearby woods. At night they returned to the Firutas’ house where they spent the night and returned to the forest before sunrise.

While hiding in the woods, the Bonders met a group of forty-two Jews hiding in the bunkers. The leader of the group was working with the Russian partisans. Both the partisans and the Jewish group needed a carrier to distribute guns. Young Bronislaw took that job and oftentimes Joseph assisted him in smuggling weapons.

In 1944 they were liberated by the Soviet army. Joseph and Joan’s parents were killed in the Skalat ghetto and buried in a mass grave outside of town. The rest of the Bonder family – grandparents, aunts, uncles, cousins – perished. Thanks to the Firutas and their courage, Joseph and Joan survived. After the war, both Joseph and Joan moved to the United States. Joan passed away in 1991.

Bronislaw Firuta passed away in August 2012.

In 2009 the JFR reunited Joseph Bonder and Bronislaw Firuta. The award winning documentary retelling their story can be viewed here.