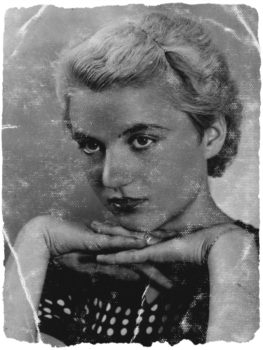 Krakow, Poland… March 1941 – Immediately upon occupying Poland, the Germans began issuing decrees against the Jews. As the persecution escalated, Maria Florek and her husband contacted their friends, the Goldberg family, to see what they could do to help.

The Goldberg family consisted of Mr. and Mrs. Goldberg, their two sons, Wicek and Romek, and three daughters, Franka, Maria, and Mila. In March 1941 they were forced to move into the Krakow ghetto. That fall, the Goldbergs’ son, Wicek, managed to escape and asked Maria for shelter. She hid him throughout the winter. In 1942 she learned that a neighbor had informed a German soldier that she was hiding a Jew. Maria smuggled Wicek out of her house and asked a priest for help. The priest obtained false papers for Wicek, who passed as a gardener until the end of the war.

Maria regularly brought food and money to two of the Goldberg daughters who worked as slave laborers at a nearby factory. She would throw the package over the wall of the factory if she could not see them in person. Maria knew that she was risking her life, but her conscience prevailed.

In 1943 Mr. and Mrs. Goldberg’s niece, Franciszka, escaped from a concentration camp in Lvov. Maria found shelter for her with a family in a small village. The family agreed to hide Franciszka, but only if they were paid. Maria gave this family her own money and once a month made the trip from Krakow to the village, bringing food, clothing, and additional funds. As a result of Maria’s actions, several members of the Goldberg family survived the war.

Maria Florek passed away in October 2012.