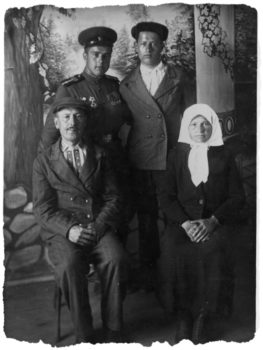 Denis and Fedora Gonchar and their sons, Stepan and Ivan

Locipenok, Ukraine… Summer 1942 – Soon after the German invasion of the Soviet Union in June 1941, the Einsatzgruppen followed behind the army and began systematically murdering entire Jewish communities. As the Germans approached Nemirov, a town of some 6,000 Jews, one man received word of the impending Aktion and told his niece, Valentina, and her mother, Rachelle, to leave town. The two women immediately fled to the neighboring city of Vinnitsa. Upon their arrival, they learned that the entire Jewish community in their hometown had been massacred. They also realized that they were not safe in Vinnitsa and, with nowhere to go, decided to return to Nemirov.

The Gonchar family consisted of Denis, Fedora, and their two teenage sons, Stepan and Ivan. When Rachelle and Valentina approached the family, they immediately agreed to hide them. Valentina, who was able to pass as a Christian, secured false identity papers and soon left to search for work. Rachelle remained in hiding for two years. In the winter, she lived in a small hole behind the oven. During the warmer months, she lived in a shed. Stepan and Ivan brought food and water to Rachelle.

After the village was liberated by the Soviet army in March 1944, Rachelle and Valentina returned to their home. Valentina maintained her friendship with the Gonchars for the rest of their lives.

Stepan Gonchar lived in the same village until he died in January 2014.