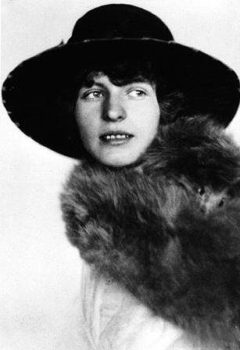 Prague, Protectorate of Bohemia and Moravia… 1939 – Marianne, an Austrian-born child of a Czechoslovakian mother and Polish father, became a famous actress and opera singer.  In 1924, she moved to Berlin, where five years later she married Hans Goldlust, a Jewish journalist and literary editor.

In 1934, when the Nazis rose to power, the couple decided to move to Prague, Protectorate of Bohemia and Moravia (now the Czech Republic), where Marianne became a theater critic.  After the Nazis occupied Prague, Marianne’s husband was arrested.  Marianne managed to get her husband released and he immediately fled to England.  Marianne was stranded in Prague when war broke out in September 1939.  Marianne, who was not a Jew, was active in an anti-Nazi resistance group.  She provided support for her husband’s mother and sister, as well as other resistance members and created a network, which allowed Jews to escape to Vienna.