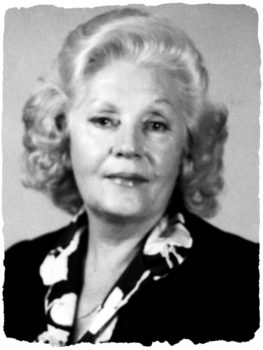 Tarnopol, Poland… July 1943 – Irene Gut worked in a laundry in Tarnopol, Poland (now Ukraine), where she made friends with a number of Jews. Eduard Ruegemer, a German major, was in charge of the laundry. Ruegemer had some medical problems and Irene prepared special meals for him. Because of her position with the major, Irene was able to learn about Aktions against the ghetto, and to obtain special passes, which made it possible for her friends to leave the ghetto on the days it was being raided.

Days before the ghetto was scheduled to be liquidated, the major asked Irene if she would become his housekeeper. Irene realized that she now had a place to hide her friends. She brought her friends into the villa and hid them there. One day Major Eduard Ruegemer returned home early and found the 12 Jews whom Irene had been hiding in the basement.

Ruegemer was furious with Irene and said that he had a price for helping her. She had to be his – and willingly. She had no choice; she agreed. Noticing activity at the major’s home, the Gestapo attempted to raid the house. Irene refused to let them in, saying it was the home of a major in the German army and they should see Major Ruegemer at work. The Gestapo did not enter.

With the Russians advancing, all German and administrative personnel were ordered to evacuate. Irene went with her Jewish friends into the woods. On March 23, 1944, the Jews were liberated by the Russians. Irene moved with the retreating Germans to Kielce and joined up with a partisan unit.

After the war, Irene was in a displaced persons camp and then immigrated to the United States. Major Eduard Ruegemer was recognized as a Righteous Gentile by Yad Vashem in 2012.