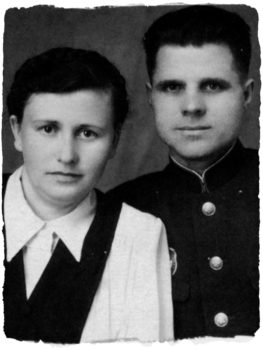 Staraya Ushitsa, Ukraine… July 1942 – By the summer of 1942 the Germans had killed most of the Jews in Staraya Ushitsa, leaving only able-bodied workers, whom they herded into the ghetto. Anna Berman had lost her entire family. Piotr Gutzol often brought food to the ghetto. He met Anna and offered to help her escape. She was too scared to try.

Piotr convinced his younger sister, who was also named Anna, to give him her identity papers.  When Piotr returned to the ghetto to give the papers to Anna Berman, he discovered that she had been moved by the Germans.  Piotr finally found her in the Kamenetz-Podolsk ghetto. Using the fake identity papers, he was able to get Anna out. They went to a small village where no one knew them. They stayed there until they were liberated by the Soviet army in 1944. Piotr took Anna to live with his parents, and he joined the Soviet army to fight the Germans.

After the war, Anna and Piotr were married. Piotr Gutzol passed away in September 2005.