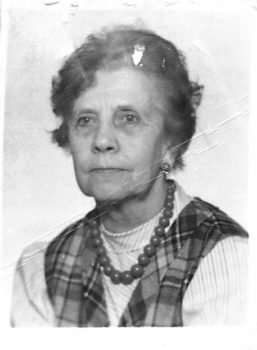 Przemysl, Poland…1942 – Irena Gwozdowicz and Lusia Rosen were school friends and spent time at each other’s home.  Helena, who was Irena’s older sister, also befriended Lusia.  Before the outbreak of World War II, the Gwozdowicz family moved from Bursztyn to Przemysl.  The Rosen family remained in Bursztyn.  The Germans occupied Bursztyn on July 3, 1941. In September 1941, the Jews were relocated from homes on the main streets of Bursztyn into an unsealed ghetto.  The ghetto was liquidated on October 15, 1942, when the Germans brutally relocated the remaining Jews from the ghetto to the neighboring town of Bukaczowce.  Lusia, having witnessed the murder of her little sister, parents and grandparents by the Germans, managed to escape from the ghetto just before the ghetto’s liquidation.

Lusia made her way to Przemysl.  Helena wrote: “My mother had told Lusia that if she were in danger, she should come to us in Przemysl. Every time we went to Bursztyn to visit my father’s grave, we tried to bring the Rosen family some food, money, and we gave them a note with our address in Przemysl”.

As Helena wrote, “Lusia reached the Gwozdowicz home on foot, exhausted, hungry, and with high fever. A priest she met on her way gave her the birth certificate of Jozefa Balda, a girl her age who had recently died.” Later, Mrs. Gwozdowicz obtained an identity card for Lusia using the same name. In Przemysl, pretending to be Jozefa Balda, the daughter of a maid of the Gwozdowicz family, Lusia worked at the German officers’ mess.

Helena wrote, “I remember I heard sounds of gunfire at night, very intense, and in the morning, when we went out in the yard, we saw a Russian soldier. The Germans were gone. So Luisa was free”.

After the war, Lusia Rosen left for France, and then went to Israel. Helena Gwozdowicz graduated from a teacher’s college. As Helena wrote, “I taught until 1974, then worked part-time in a school for 15 years. I worked also as the manager of the youth club and library.” At age 93, Helena was still teaching children at home.