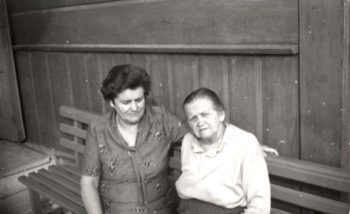 Izbica, Poland… July 1942 – Fourteen-year-old Halina lived with her mother, Kazimiera, and father, Mieczyslaw, in Izbica. The Babiarz family owned a flour mill. Before the war, one of their customers was a baker, Zeev Lipszyc. In July 1942, during the liquidation of the Izbica ghetto, the Lipszyc family was deported to the Belzec death camp. Their fourteen-year-old son, Chanan, managed to escape. He went to Halina’s family and asked if they would hide him. The father strongly opposed taking in the boy; the mother could not turn Chanan away knowing that he would be killed. Kazimiera agreed to hide him. For the next two years, Halina and Kazimiera took care of Chanan, they built a hiding place for him in their home.

In the summer of 1943, the family was denounced by one of their neighbors. The Germans stormed into the house looking for Chanan, who had managed to escape hours earlier. Hiding in the forest near Halina’s house, Chanan met his friend, David Brandt. After going from place to place with no one offering help, Chanan and David decided to go back to Halina’s family and ask for their help again.

Despite the danger of denunciation and the death penalty for hiding Jews, Halina and Kazimiera agreed to shelter Chanan and David. This time Halina and Kazimiera built the two teenagers a hiding place in the forest. Each day Halina would take food to Chanan and David. The two boys remained in the forest until the area was liberated by the Soviet army.