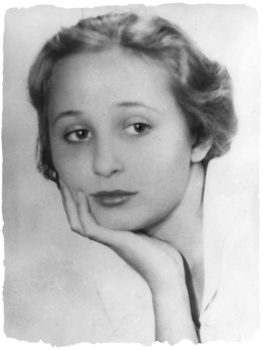 Budapest, Hungary… March 1944 – “I met my husband at five-o-clock tea on March 15, 1939. He walked me home, and told me: ‘You are going to be my wife.’” The Herczeghs were married on July 20, 1940; she was 19, he was 28. Gezane’s husband had just started his business, Herczegh Radio, specializing in communications and electrics.

In 1940, Hungary had not yet officially entered the war, but the Herczeghs felt danger all around them. As anti-Jewish laws became increasingly severe in Hungary, factories and companies were forced to fire Jewish employees. Gezane’s husband would not stand for it. Sixty percent of his employees were Jewish.

On March 1, 1942, Mr. Herczegh was drafted into the Hungarian labor service. At the end of November when her husband was discharged, Gezane recalled, “He was sleeping on the floor for weeks. He did not talk and did not tell me anything about his experiences. It was only after months that he could talk about what he had gone through.”

In March 1944, the Germans occupied Hungary. Knowing that hiding one Jew could mean death for their entire family, the Herczeghs, now with two small children of their own, hid twelve Jews in their basement and obtained more than 200 labor certificates for Jewish workers.

Gezane remembered, “Many people found temporary shelter [in the basement] until they got hold of identity papers, so they could go to another safe place. Others were there until liberation… We felt rage against the Nazis and the Arrow Cross [the pro-Nazi Hungarian party]… We would not hand over a soul to them!” Gezane’s husband was arrested in December 1944 but later released. They were liberated on January 18, 1945. The whole family survived the war as did the Jews they hid.

Gezane’s courage never faltered. “I really wish that our nation might never be forced to live in such fear and terror as in those years, when we tried to stand our ground, obeying an inner command, against all odds.”