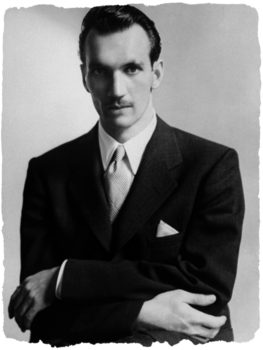 Warsaw, London, Washington, D.C.… 1942 – Jan Karski (born Kozielewski) was a junior officer in the Polish army when Germany invaded Poland on September 1, 1939. Karski was captured in a fight with the Soviet army, who were allies of the Germans at that time, and managed to escape. He made his way to Warsaw where he joined his brother Marian who was a police commander and an important figure in the underground.

In-between assignments, Karski was captured and tortured by the Gestapo. The underground managed to rescue him and Karski went into hiding.

His final mission came in 1942. Karski was asked to report on conditions in occupied Poland in general and on the situation of the Jews in particular. In the spring of 1942, Karski met with leaders of the Jewish resistance in Warsaw. They arranged for Karski to be smuggled into the Warsaw ghetto. Karski went into the Warsaw ghetto on two occasions where he met with Jewish leaders in the ghetto who begged him to let the world’s leaders know of the desperate situation of Polish Jewry. In addition to entering the Warsaw ghetto where he witnessed the starvation and horrors of ghetto life, Karski went to other cities and towns in Poland in order to obtain information on the annihilation of Polish Jewry. Following his visits to the Warsaw ghetto, Karski posed as a Ukrainian guard at the Izbica transit camp to witness Jews being forced onto deportation trains headed for death camps. Each of these trips and visits was extremely risky. Karski was putting his life on the line to obtain first-hand information on the plight of Polish Jewry.

In November 1942, Karski, after a dangerous trip across Europe, arrived in London. Karski delivered his report to the Polish Government-in-Exile and also met with Foreign Minister Anthony Eden and other key leaders in Britain. Upon completing his mission in Britain, Karski left for the United States.

Upon his arrival in Washington, D.C., Jan Karski met with President Roosevelt, Supreme Court Justice Felix Frankfurter, other government officials, and Jewish leaders. Justice Frankfurter, after meeting with Karski and listening to Karski’s pleas for the allies to do something to save the Jews of Poland was reported to have said, “I am unable to believe in what I have just heard, in all the things that you have just told me.”

Karski’s pleas fell on deaf ears. He was told Germany’s defeat would be the allies’ main focus. Since Karski’s identity was known to the Germans, he remained in the United States where he wrote several books and worked tirelessly to let people know about the Holocaust. Karski earned his Ph.D. at Georgetown University, where he taught in the School of Foreign Service for 40 years.

Jan Karski performed true acts of heroism. In 1982 he was recognized as a Righteous Among the Nations by Yad Vashem, Israel’s Holocaust Authority. Jan Karski did not think of himself as a hero. When he addressed the United States House of Representatives in 1981, he said: “And thus I myself became a Jew… so have all the Jews who were slaughtered become my family.”