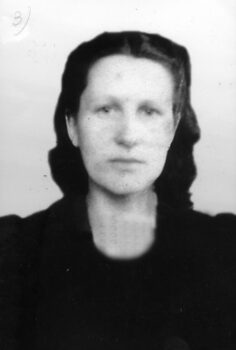 Skaudvile, Lithuania… May 1942 – Brone Jurgiliene lived with her aunt and uncle, Rosalija and Motiejus Tverjonaite, in a small village in Lithuania.  Before the war, Rosalija worked for a Jewish family and met a number of the family’s relatives, including the Levy family.

Germany invaded the Soviet Union on June 22, 1941, and arrived in Skaudvile on the 23rd. On July 16, the Germans, with members of the Lithuanian auxiliary police, killed most of the Jewish men of Skaudvile in the Puzai Forest.  On September 15, 1941, the remaining Jews of Skaudvile were killed.

In May 1942, Rosalija went past the local jail, where she recognized 16-year-old Nachum Levy among the prisoners. He told her that the Germans had murdered his entire family and that he had managed to escape and hide in a nearby village until one of the villagers denounced him to the Germans.  Rosalija would visit Nachum almost every day, bringing him food.  A week later, Nachum managed to escape from the jail and made his way to Rosalija’s home.

Since widespread searches for Nachum Levy were sure to be conducted, Rosalija advised Nachum to leave Skaudvile for a while. Several months later, Nachum returned to Brone and Rosalija’s home, where they cared for him. His presence was kept secret from Motiejus.  Brone willingly joined her aunt in hiding Nachum.  They hid Nachum in the barn and sometimes in the house. As the family was afraid of being denounced and having their home searched by the Germans or the Lithuanian auxiliary police, from time to time, Nachum would leave Brone and Rosalija’s home to hide elsewhere.  Nachum would always return to Brone and Rosalija.

The area was liberated by the Soviet army in October 1944.  Nachum, Rosalija, and Brone all survived.