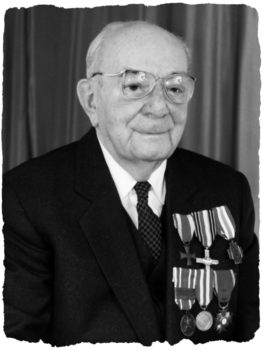 Warsaw, Poland… 1940 – One day Jadwiga Strauch came to the home of Eugeniusz Jaworski. She was lice-infested, dirty and in rags. Jadwiga, who had escaped from the Warsaw ghetto, had been an acquaintance of Eugeniusz’s sister. Eugeniusz did not know Jadwiga, but he took her in and obtained false identification papers for her.

Unable to find work, Eugeniusz left Warsaw with his wife, child, and Jadwiga. They moved to a town where no one knew them. Eugeniusz found a job in a lumber mill, where he had dealings with representatives from the Sokolow ghetto Jewish Council. Eugeniusz tried to help the Jews as much as possible. One of the council representatives was Hersh Biderman.

Jadwiga looked like a Pole and spoke correct Polish, but with an accent, which was noticed. Eugeniusz left the town fearing denunciation, and found a position in another mill a number of kilometers away.

Late one night, there was a knock at Eugeniusz’s door. Upon opening the door, Eugeniusz found Hersh Biderman, his two sisters and his four-year-old son. Hersh begged Eugeniusz to give them shelter if only for a few days. The Bidermans had managed to escape from the Sokolow ghetto, which had been liquidated.

Eugeniusz lived in a small four-apartment dwelling. It was very dangerous for Eugeniusz to take in Hersh and his family. He decided to bring them to the mill using his night pass. Eugeniusz introduced them to the managers as new workers. The manager was very compassionate and never said a word. False papers were obtained for the Bidermans. None of the workers in the factory reported the family, even though Eugeniusz believed that several suspected their real identities.

In 1943, Eugeniusz joined the Home Army, or AK. In August 1944, he returned to Warsaw to fight the Polish uprising. He was taken prisoner and was liberated by the Americans. He joined the second division of the Anders Army until he was demobilized in 1946. He returned home to find that his wife, two children, Jadwiga and the Bidermans had survived. Jadwiga settled in Israel and the Bidermans left for Nicaragua. Eugeniusz maintained contact with Jadwiga until her death in 1979. He lost contact with the Bidermans.