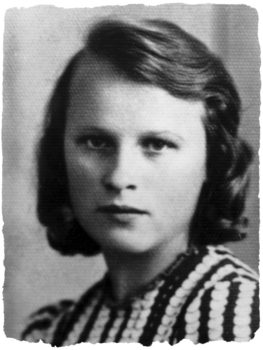 Piaski, Poland… 1941 – Marianna Jarosz and her brother, Maksymilian, came from a large family of eleven. They lived in the village of Piaski, near Lublin. Jews had always been present in the Jarosz family’s life. Marianna recalls, “My parents had a large house. Downstairs were eight stores. Until the war broke out, someone from the Jewish community was always renting a store from us.” The Jarosz family rented some of the rooms in their home to the primary school in Piaski. Most of the students were Jewish. Before the war, relations with Jewish neighbors were always good: “We’d go to school together, we’d play together, and such. They had their religion, we had ours, but the holidays were respected – ours by their folks, theirs by us. This was life… it was normal life.”

When the German occupation began, Marianna was horrified to see how terribly the Jews were treated. Her family had stored food in preparation for the war, most of which they used to feed starving Jews.

Marianna and Maksymilian saw the desperation of the Jews deported from Germany to Poland. Their family took in Wolf Lewin and his two daughters, Hanna and Gertruda. They had almost nothing when they arrived in Piaski during the bitter December of 1940, but the girls knew how to knit, and they traded socks and gloves for food. The two families shared what little they had and became very close.

When the ghetto was established in Lublin in 1941, Wolf, Hanna, and Gertruda Lewin were forced to move into the ghetto. While in the ghetto they kept in close contact with Marianna and her family. Marianna brought them food and medicine. Maksymilian would smuggle weapons into the ghetto. The daughters were sent to Trawniki, a transit camp, in the fall of 1942. Wolf managed to remain in the ghetto until April 1943 when he was deported to Trawniki and then to Belzec where he was murdered.

The Jarosz family was active in the Polish Home Army and was already under suspicion by the Germans. Their decision to hide some eleven Jews made life very difficult and dangerous for all. It was known in the community that if a Jew could make it to the Jarosz farm, they would not be turned away.

Maksymilian passed away in May 2020. Marianna is in her 90s and lives in Lublin, Poland.