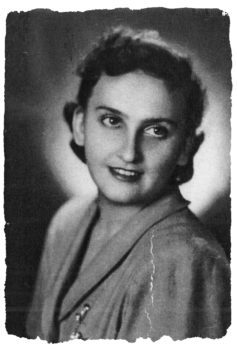 Warsaw, Poland… December 1942 – Michael Hochberg was born in March 1938, in Warsaw, Poland. His parents, Rivka and Avraham, lived at 40 Leszno Street. When the Germans established the Warsaw ghetto on October 12, 1940, and drew the ghetto boundaries, 40 Leszno Street was located in the ghetto. In this respect they were fortunate compared to the many Jews who had to move into the newly created ghetto and were forced to find a place to live.

By December 1942, most of the ghetto’s inhabitants had been killed either in the ghetto from starvation, disease, or German brutality; or they were deported to Treblinka, a death camp. Rivka and Avraham Hochberg decided to save their only child and sought out a family acquaintance, Stanislaw, to help smuggle their son, Michael, out of the ghetto. Upon getting Michael out of the ghetto, Stanislaw took Michael to his friend Mieczyslaw Jakubowski, a Polish, Catholic acquaintance. Stanislaw promised to come and get Michael in a few days when he found another place for Michael to hide. Stanislaw did not return for Michael.

Mieczyslaw lived with his mother, Rozalia, his father, Jozef, and three sisters, Helena, Zofia, and Krystyna. When Michael was brought to their home, the family agreed to keep him. Jozef Jakubowski was a member of the Polish Home Army. He moved out of the home to protect his work with the Polish underground and not to jeopardize his family who was hiding Michael. Jozef Jakubowski was killed in the Polish Uprising in August 1944.

The day-to-day care of Michael fell to Krystyna. Michael was not allowed to leave the apartment for fear of being denounced as a Jew. The only time he went outside for almost two years was in the evening when it was dark and no one could see him. The Jakubowski apartment had a balcony which faced an inside courtyard. When it was deemed safe, Krystyna would go out on the balcony with Michael. It was from this balcony that Michael saw the flames of the Warsaw ghetto burning in April 1943. Michael’s parents, who had built a bunker in the basement of their building, were denounced, killed in the ghetto, and buried in the mass grave in the Warsaw Jewish cemetery.

In August 1944, after the Germans put down the Warsaw Uprising, they forcibly marched the entire civilian population of Warsaw out of the city. Rozalia refused to abandon Michael and she took him with her family as they left Warsaw. Rozalia died in December 1944. Krystyna was now responsible for the full-time care of Michael and did not go to her mother’s funeral so as not to leave Michael alone. They all survived the war. Shortly after liberation, Stanislaw returned for Michael.

Michael was placed in a Jewish orphanage where he lived for five years. After completing his studies, Michael left for Israel in 1957. Michael was the only member of his family to survive.

Krystyna Jakubowska passed away in October 2020.

The Jewish Foundation for the Righteous brought Krystyna and Michael together at its 2015 New York dinner.  Click here to see the reunion video.