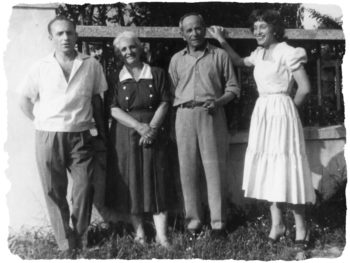 Belgrade, Yugoslavia… April 1941 – Before the war, Miroslav Kirec was a member of the youth club called “Polet.” It was here that he met Sonja Baruh. When the war broke out, Miroslav joined the resistance. He and his parents hid Sonja from April 1941 until March 1942, when she was noticed by a neighbor.

Miroslav then found Sonja another hiding place. However, Miroslav was arrested for his activities with the resistance and was put in Banjica, a camp located near Belgrade, Yugoslavia (now Serbia). From there, he was sent to Mathausen by train. A group of men in his car were able to pry open the door and they jumped off the train. Most of those who remained in the train car perished at Mathausen. Miroslav joined the partisans and fought with them until liberation.

Sonja Baruh survived the war and returned to Belgrade. Miroslav Kirec died in 1998.