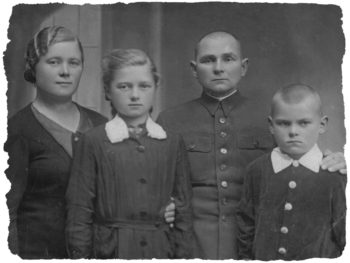 Paulina Kamm escaped the Vladimir-Volynsk ghetto after her parents and siblings had been killed in December 1942.  She sought shelter in the homes of her non-Jewish friends, but they were all too afraid to keep her for more than a few days.

Galina and Yuri would bring food to Paulina each day.  The family also provided her with clothing and false identity documents, should the farm be raided by the Germans.

Paulina stayed with the Miaskovsky family for almost a year until they were liberated by the Soviet army on June 23, 1944.  She was the only member of her family to survive the war.  After the war, Paulina immigrated to Israel.