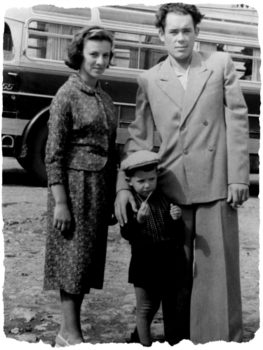 Krasnopolye, White Russia… 1942 – Eugenia Grinberg, a teenager, was on holiday when the Germans invaded the Soviet Union in June 1941. Separated from her parents, she was among those rounded up and put in the ghetto in Krasnopolye, White Russia (now Belarus). In 1942, when the ghetto was about to be liquidated, Eugenia escaped and sought shelter in a nearby potato field. She wandered from farm to farm, yet no one would give her shelter until a kind peasant woman took her to the home of Nikolay and Anastasiya Melnikov and their two children, Zinaida and Vladimir.

The Melnikov family agreed to hide the Jewish girl in their home. Eugenia stayed with Vladimir and his family until they were denounced for hiding a Jew. The entire family, along with Eugenia, fled into the woods. They remained in the forest until the village was liberated by the Soviet army. Upon liberation, they returned to their farm. Eugenia remained with the Melnikov family until her parents, who survived the war, came to the village to find her.

Vladimir Melnikov passed away in July 2002.