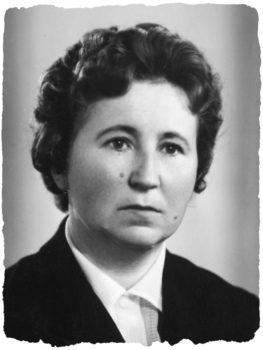 Vydoshnya, Ukraine… November, 1941 – During the Nazi liquidation of the village of Vydoshnya, Faina Berstein and her daughter, Sonya, were hidden by the Melnik family, which included three children –Taisiya, Victor, and Galina.  The Melnik family hid Faina and Sonya for more than three years.  As Sonya wrote, “In such a terrible time these people surrounded us with kindness and care.  We lived like one family. Their nobleness, kindness, and humanity cannot be described.”

The Melniks helped other Jews as well, including Faina’s sister and her three children who had escaped the massacre in Zinkov.

Taisiya Melnik moved to Israel in 1996.