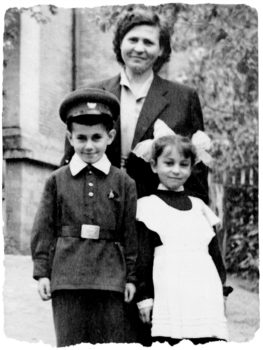 Nina Marchuk with two of her students

Poplavskoye, Ukraine… Winter 1944 – In 1941 Rima Shipitsina lost her entire family in Poplavskoye; they were killed by one of the mobile killing squads, known as Einsatzgruppen. Rima and her sister were taken by the Germans to the Karlovsky labor camp in the Domanevka region. They remained in the camp from 1942 until 1944, when they managed to escape, each going in a different direction.

Rima returned to Poplavskoye and sought shelter with Nina Marchuk and her family; she had nowhere else to go. Rima had gone to school with Nina’s sister. The Marchuk family lived in a school located on the outskirts of the village.

Nina and her family agreed to shelter Rima. She became a member of their family and was introduced as their niece. Shortly thereafter, the Germans forced the villagers to leave their homes. Rima remained with the Marchuk family during this difficult time. They were starving and slept in the fields.

At this time, the Germans were retreating and were killing all remaining Jews. It was very dangerous. Rima stayed with Nina and her family until liberation.

Nina Marchuk passed away in Moldova at the age of 97 in January 2010.