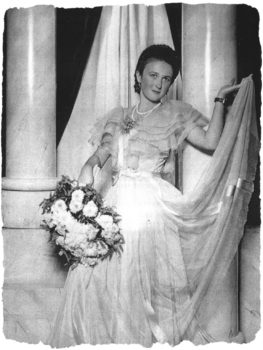 Presov, Slovakia… Fall 1941 — Elena Maradikova lived with her brother and parents in Presov. Elena’s father, Ondrej, worked as a detective for the Presov police. Prior to the outbreak of World War II, two young Jewish men, Martin Weil and Jan Kohl, had rented a room from the Maradik family.

When the war broke out, life for the Jews of Presov became increasingly difficult. In March 1942, the Germans ordered the deportation of Jewish women and girls. Martin and Jan hid a Jewish girl in the Maradik home with the approval of the family.

Over time, the deportations intensified. Because of his position with the police, Ondrej could warn Martin and Jan about German plans to round-up Jews. He also erased Martin and Jan’s names from the database of local residents gathered by the police. The entire Maradik family participated in the process of rescuing the two Jewish men. Elena and her brother, as well as their parents, engaged in searching for a new place where Martin and Jan could hide. When a new hiding place was found, the family provided them with food and other basic needs.

Eventually Martin and Jan obtained false identity documents. They decided to leave the Maradik family and move to an area controlled by anti-German partisans. Both men survived the war by constantly moving. After the war, Martin and Jan came back to Presov. Upon their return, they learned that Ondrej had been arrested by the Germans and died in Bergen-Belsen. A few years later, Elena’s mother passed away.

Both men left Presov. Martin went to the United States and Jan moved to Brazil.