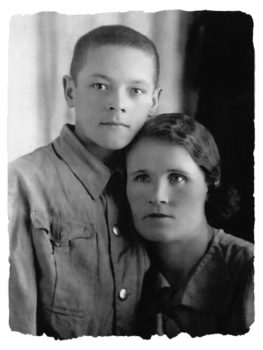 Cherkassy, Ukraine… August 1941 – Ivan Mamchenko worked at the local railway station and his wife, Maria, managed a store. They had four children; the youngest was born the last week in June 1941, immediately after the German invasion of the Soviet Union.

When the war broke out, Ivan was conscripted into the Soviet army and died in battle. Maria and her children tried to flee Cherkassy ahead of the advancing German army, but their train was bombed. Maria was wounded and her infant baby killed. She and her other children had no choice but to return to Cherkassy, which was now occupied by the Germans. Because of her wounds, Maria was not able to work for months, so the burden of supporting the family fell on her eleven-year-old son, Valentin.

Among Valentin’s daily duties were to visit their Jewish friends Manya Gershunova and her three children, five-year-old Lidia, ten-year-old Gesya, and fifteen-year-old Mitya, to make sure that they were okay. Manya Gershunova had not obeyed the German order to move to the ghetto and had remained in her apartment. Manya pretended to be a Russian married to a Jew who was serving in the Soviet army.  This ruse worked for a while until she was denounced and imprisoned.

When the Jews of Cherkassy were marched to the pits where they were being shot, Manya Gershunova, who was in this group, was carrying her youngest daughter, Lidia. Manya saw Maria in the crowd and called her name. When they made eye contact, Manya kneeled quickly and left Lidia wrapped in cloth standing on the sidewalk. Maria grabbed the child and hurried home. Later that night, after having run away from the killing Aktion, Lidia’s older brother, Mitya, also made his way to the Mamchenko home. Manya and her daughter, Gesya, were murdered that day.

The next morning Lidia woke up with a high fever, so Maria took her to the local hospital. A friend of hers who worked at the hospital registered Lidia under a Christian surname and managed to keep the girl in the hospital, which was a relatively safe place, for many weeks after her recovery. Maria visited Lidia regularly and eventually moved her to the city orphanage. Mitya hid for some time with the Mamchenko family.  When it became too dangerous to stay there, he joined his Jewish friend, Sergey Tarasevich, in his hiding place. Once a week, Valentin brought the Jewish boys food and news.

Lidia and Mitya Gershunovi and Sergey Tarasevich all survived the war thanks to the courage of Valentin and his mother, Maria.

Maria Mamchenko passed away in 1973.  Valentin is in his 90s and continues to live in Ukraine.