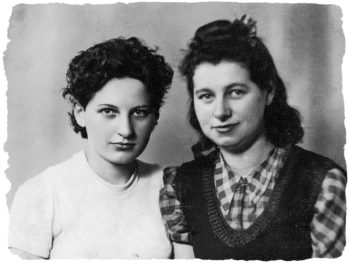 Gajowka, Poland… Spring 1943 – Anna and Jan Malinski lived with their ten children in a one-room house on a small farm. Their home was on the outskirts of the village, close to the forest. The family provided short-term hiding places to their Jewish neighbors as the German persecution of Jews escalated. The Malinski daughters, Helena and Regina, were very involved in rescuing Jews.

In 1943, Helena was asked by a Polish friend to hide Marysia Krawczyk, a young Jewish woman, for an extended time. She discussed the matter with her parents because she knew that the entire family would be in danger. Together they agreed to shelter Marysia in their small home. As the Warsaw ghetto was burning, Marysia came to hide with the Malinski family. A few days later the family agreed to also hide Marysia’s older sister, Konstantyna, and her four-year-old daughter, Halina.

Feeding fifteen people on a poor farm was difficult, so Helena and Marysia took matters into their own hands.  Each week they traveled to Warsaw to sell vegetables that were grown on the Malinski farm. They also became involved with the black market in order to get a little more money for bread.  Konstantyna stayed at the farm and helped Anna and Jan with the field work.

Because they lived in a small community, denunciation by neighbors was a constant threat for the Malinski family. The Germans searched the farm several times, and members of the local guard warned them on several occasions that the entire family could be shot for hiding Jews. Because of the threat to the family and fear of being recognized by former acquaintances, Marysia and Konstantyna decided to move to another region where they were not known. As Halina spoke only Yiddish, Helena and Regina agreed to care for the child. Halina stayed with them for the remainder of the war. After the war, Marysia moved to the United States; Konstantyna and Halina moved to Israel.