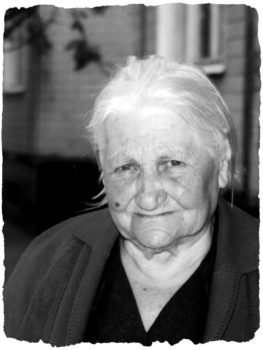 Moldavka, Ukraine… Summer 1942 – Maria and her four children lived in a small village in Ukraine.  They were very poor.  Her husband was killed right after the war started.  One evening in the summer of 1942 an exhausted, hungry, dirty, lice-infested old man came to her home. He had escaped from a forced labor camp. They gave him food.

When they shaved off his beard, they realized that he was not an old man, but rather a young fellow of eighteen.  This is how Maria and her children met David Starodinskyi.  Maria and her children did everything they could, sheltering and feeding him.  David survived the war and remained very close to the family, who treated him like a son.

As Maria wrote in a letter to the Foundation, “Rescuing this Jewish boy, we had no idea that we were rescuing a future researcher, writer, community worker.  Any other person could have been in his place and my children and I would have done the same thing… That’s what God wants all the people to do, to help each other in need disregarding religion and nationality.”