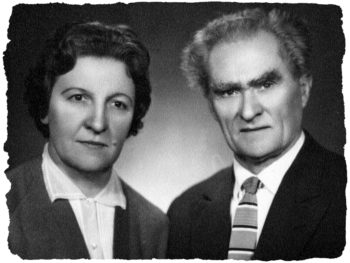 Vilna, Poland… June 22, 1941 – The Germans occupied Vilna, Poland (now Lithuania), and proceeded to kill thousands of Jews in the Ponary forest. The remaining Jews were sequestered in the ghetto. The Christian population was warned to stay away. This did not deter Stasia and Jonas Ruzgys from visiting their friend Lisa Aizenberg and her two-year-old daughter, Rita. Stasia arranged for Rita to leave the ghetto by having her admitted to the hospital as a non-Jew and then taken to a Polish family upon her release.

Stasia and Jonas then made plans for Lisa’s escape from the ghetto when Lisa’s work permit had been revoked. The mother and daughter were reunited at the Ruzgys’s where they were hidden in a recess behind the wall of a back room. Lisa remembered it as “a dark hole in which we hid and which we reached by walking through a clothing closet. We had to lie there for hours on end with a blanket covering our heads to mute the sound of breathing or any sign of human existence.”

Stasia was denounced by an informer and summoned to the Gestapo. Lisa decided to take her daughter and run into the forest to protect Stasia and Jonas – “to go any place, wherever my eyes might lead me, with only one thought, that the two of you would not pay with your lives for having given me shelter.” Stasia would have none of this. “Lisa, you’re not going anywhere. If we are going to die, we will all die together.” The Gestapo did not arrest Stasia.

Within a short time, the ghetto was completely liquidated – every trace of Jewish existence disappeared. In one of the main streets, three bodies hung from an electric pole with a sign: “Any citizen harboring a Jew will look like this.”

The Ruzgys helped a number of Jews to escape. As Lisa wrote to Stasia and Jonas before her death, “You, my dear friends, did for Rita as much as if she were your own daughter.”