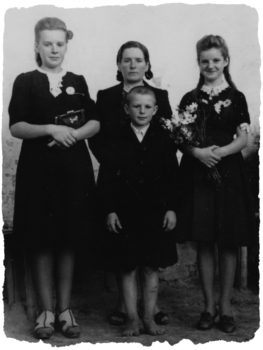 Dudenai, Lithuania… July 1941 – Israel Katz lived with his wife, Berta, and two children, Mary and Leibel, in Giedraiciai, Lithuania. They lived above their store.  One of his customers was Leokadija Ruzgiene, a widow from the nearby village of Dudenai. She lived on a farm with her daughters, Egle and Meile, and son, Aurimas. Leokadija earned her living as a seamstress. The families were friends.

When Germany invaded Lithuania in June 1941, life changed. The Germans and their Lithuanian collaborators began to round up and kill Jews. Leibel was taken from the Katz home by Lithuanian collaborators and was marched to the forest where he was killed.  A week later, Israel was also brought to the forest to be killed but managed to escape.  Realizing what lay in store for the rest of his family, he sought shelter and arranged for his wife and twelve-year-old daughter, Mary, to join him.

Shortly after his wife and daughter joined him, Israel realized that they could not trust the woman with whom they were staying. In mid-July 1941, they left in the middle of the night and walked to the Ruzgys farm. They knocked and asked Leokadija if they could stay for the night. The Ruzgys family hid the Katz family for more than three years. At first they hid in a cabinet used to smoke meat. Realizing that this was not a secure hiding place, Israel dug a hole under the cabinet where he hid with his wife and daughter. The Ruzgys family did not have enough food for themselves, let alone the Katz family, but they gave them shelter and shared with them what little they had.

There were times when Leokadija was afraid of being denounced, but her children insisted that they continue to shelter the Katz family. After hiding the Katz family for three years, the Ruzgys family was denounced by neighbors.  The Lithuanian police came to their home and arrested Leokadija, Mary, and her parents. They were taken to the prison in Ukmerge. The children were left alone in the house. With their uncle, they sold the few items they had, including their mother’s sewing machine, so they could bribe the prison officials to keep their mother and the Katz family alive.

Leokadija and the Katz family spent six months in the Ukmerge prison before the Soviet army liberated the area. Leokadija, Mary, and her parents returned to the farm together, and they were reunited with Egle, Meile, and Aurimas. After liberation, the Katz family returned to their home in Giedraiciai. Fearing retribution from their neighbors for having saved Mary and her parents, Leokadija and her children had to flee their home. They went to Giedraiciai and were taken in by Israel Katz. When the Katz family left Lithuania for the United States, they gave their home to Leokadija and her children. After Leokadija’s death, her daughter, Meile, lived in the Katz home. Today, Leokadija’s granddaughter, Dalia, lives in the former Katz home.

Egle and Aurimas were reunited with Mary at the JFR’s 2011 Annual Dinner on November 29, 2011.  They had not seen each other since 1945.  The 2011 documentary retelling their story can be viewed here.