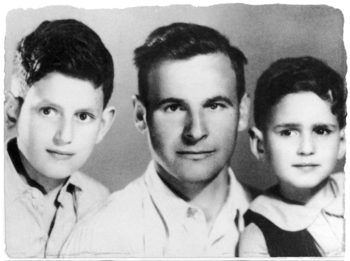 Warsaw, Poland… 1943 – In early 1943, the Warsaw ghetto was nearing the end. Less than 50,000 Jews remained, including three young boys, Jacob, Shalom, and David Gutgelt, ages ten, seven, and five. Their mother had died, and their father had fled to Russia seeking a way out of Poland for his children. The boys’ aunt Hanna left the ghetto to look for the family’s prewar chauffeur, Stanley. She wanted to seek his advice on how best to smuggle the children out of the ghetto. Hanna arrived safely at the man’s apartment, only to find out that he had been killed. Alexander Roslan, a friend of Stanley’s, knew of the chauffeur’s intention to help the Gutgelts. Alexander decided that he would try to help the family.

Even though he and his wife had two children of their own, Alexander suggested that the Gutgelt boys move into his apartment. He also suggested to Hanna that her other relatives flee the ghetto and join the boys in his home. She thanked him for the offer but asked that it be postponed until after Passover so they could celebrate the Seder. This was a fateful decision, for the final German Aktion against the Warsaw ghetto was launched on the eve of Passover, April 19, 1943. Hanna was taken to Auschwitz and never heard from again.

As he took in each of the three boys one by one, Alexander would find a bigger apartment for the family. Suspicious neighbors and unannounced Gestapo visits made for several close calls, but Alexander devised clever hiding places for the boys, including inside a sofa. Unfortunately, Jacob, Shalom, and Alexander’s son, Yurek, all contracted scarlet fever. Yurek, who was treated at the hospital, gave his parents half of his medicine each night to bring home to the boys. Shalom died, but Jacob survived. His recovery took longer than expected and was very costly, and Alexander moved his family yet again to a one-room apartment in order to pay for Jacob’s medical treatment. Jacob and David both survived the war.

After the war, Alexander Roslan moved to the United States and settled in Queens, New York. David and Jacob went to Palestine in 1947 to be reunited with their father. Both still live in Israel.

Alexander Roslan passed away in January 2005 at the age of 94.