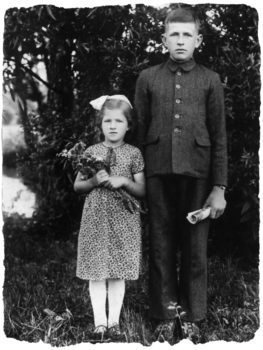 Katy, Poland … November 1942 – On September 18, 1942, Jewish teenagers Natan, Leon, and Rivka Bryk, managed to escape the Atktion in the Katy ghetto. They fled the ghetto and sought a place to hide. At first, they found refuge in the forest with a local partisan group. But the weather became bitterly cold and hiding in the forest became impossible.

The teenagers decided to return to Katy and sought help from a poor farmer, Pawel Saj. Pawel Saj had a son Edward and a daughter Teresa. The Bryk children knew Edward and Teresa from before the war. The Saj family decided to risk their lives to save Natan, Leon, and Rivka. They built a hiding place and the teenagers stayed with the Saj family until the area was liberated by the Soviet army in July 1944.

The Saj family also worked with the partisans and smuggled weapons. The weapons were purchased under Pawel Saj’s name and distributed to the partisans by young Edward.

Just before liberation, Rivka was caught by the Germans and was killed. Natan and Leon survived and after the war they came to the United States.