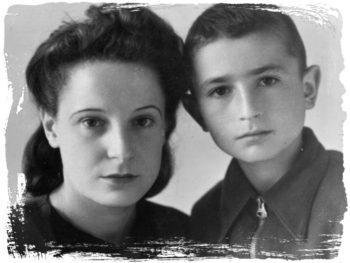 Minsk, White Russia… March 1943 – In 1943, the remaining Jews in the Minsk ghetto were desperate and were seeking every means to escape or to go into hiding. The Germans had begun a series of Aktions in Minsk, White Russia (now Belarus). What disease and starvation had begun, the Germans were determined to finish. Leah Ruderman managed to smuggle her son, Leonid, out of the ghetto. She approached Nadezhda and her mother, Anna, total strangers, and begged them to hide Leonid. Knowing the risk they were taking, Nadezhda and Anna agreed. Leah gave Nadezhda and Anna a letter for them to give Leonid when he was older. The letter told Leonid about his family.

Leah returned to the ghetto and was killed in an Aktion at the end of the month. Nadezhda and Anna took Leonid home and hid him from the neighbors. When it was no longer safe to hide Leonid in their home, they took him to the forest where he stayed with one of their relatives. After several months, Nadezhda and Anna brought Leonid back to Minsk and hid him in their cellar.

After liberation, Nadezhda and Anna started to look for Leonid’s father and discovered that he had been killed while fighting the Germans. Anna adopted Leonid and when he was old enough, she gave him his mother’s letter. Leonid was raised knowing that he was a Jew. Leonid lived with Anna and Nadezhda until he married in 1963.

Anna Salauyova died several years ago. Nadezhda is in her 90s and continues to live in Minsk, as does Leonid.