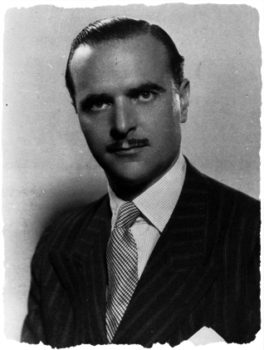 Budapest, Hungary… Summer 1944 – As the persecution of Hungary’s Jews became increasingly worse, Angel Sanz-Briz, who had been appointed to a post at the Spanish Legation in Hungary in the summer of 1944, stepped in to help Jews.  On behalf of the Spanish government, Angel offered to give Jews of Spanish origin Spanish passports.  Hungarian authorities gave Angel permission to issue Spanish passports to 200 Jews, but he discreetly changed that figure to 200 families.  As the situation worsened, Angel increased this number several times in order to help more Jews.

In addition to providing these documents, Angel set up special apartment buildings with Spanish flags, marking these buildings as part of the Spanish Legation and therefore protected, to house Jews.  Since those Jews staying in the “Spanish Houses” were forbidden from leaving the buildings, he also provided them with food and other necessities.  Angel continued to use his power to help save Jews by urging the Red Cross representative to put Spanish signs on hospitals, maternity clinics, and orphanages in Budapest where there were Jews so that these buildings would also be under Spanish protection.

Through his various efforts, Angel saved some 5,000 Jews.  After the war he continued his career as a diplomat.