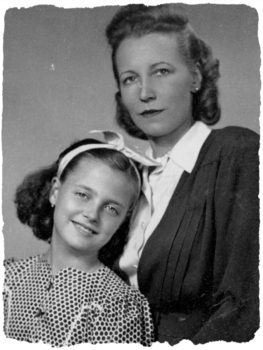 Budapest, Hungary… 1944 – When the Germans occupied Hungary in March 1944, Julia Schweder and her eleven-year-old daughter, Elizabeth, were living in Julia’s mother’s small apartment in Budapest. In January 1944, Julia’s Jewish manicurist asked Julia if she could employ three teenage sisters who had escaped from a cattle car en route to Germany from Czechoslovakia. Julia and her uncle had a small shop where they manufactured leather goods. Although they did not have any extra work, they hired the sisters and bought false identity papers for them. The sisters ate and slept with the Schweders in their tiny apartment and worked during the day in their shop until liberation in March 1945. From time to time the Schweders provided food and shelter to other Jews who were friends with the sisters.

A Romanian Jewish man and his mother lived in the building where the Schweders’s belt shop was located. With false identity papers belonging to a priest, the man visited the shop often to be with the other Jews. Julia and Elizabeth provided him with food and taught him about Catholicism to help him pass as a Christian. After the war, the man became a rabbi in England.

After liberation, Julia and Elizabeth moved to New York. Julia Schweder passed away in May 1994 at the age of 84.