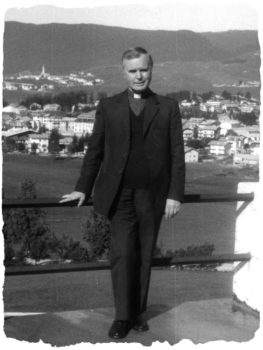 Città di Castello, Italy… 1941 – In 1935 Paul and Johanna Korn and their daughter, Ursula, fled from Germany to Italy. When Italy entered the war in May 1940, Jews who had come to Italy after 1919 were arrested and interned. Paul was sent to a camp in Salerno while Johanna and Ursula were sent to Collazone. In 1941 they were transferred to Città di Castello and reunited with Paul. Before they left Collazone a local priest told them to get in touch with Father Beniamino Schivo upon their arrival in Città di Castello, should they need help.

As Ursula wrote, “Father Schivo became our protector, our one and only best friend… In every way, endangering his own life, he saved our lives, and he did so time and time again… ” At his seminary in Città di Castello, Father Schivo provided shelter, clothing, and food for the family as well as arrangements for Ursula to continue her schooling.

In September 1943, with the beginning of the German occupation in Italy, Father Schivo moved the Korns to a summer villa owned by the Salesian nuns. For a month the Korns hid in the dark with all the windows closed and slept on the bare floor.

As partisan activities and Allied bombings were making the area increasingly unsafe, Father Schivo moved the Korns to a hiding place further into the hills. On Christmas Eve 1943, Father Schivo walked nine hours through German patrols to bring food and comfort to the Korns.

Father Schivo cared for Johanna and Ursula until the British liberated the city on July 14, 1944. Three months later, when his partisan unit and the Allies had secured the zone where they were fighting, Paul Korn returned to Città di Castello and was reunited with his wife and daughter. After the war, Father Beniamino Schivo was elevated to the rank of Monsignor.