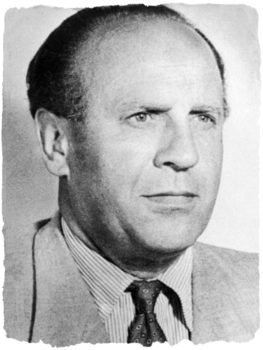 Krakow, Poland… 1941 – Oskar Schindler, a German businessman, went to Krakow in October 1939 to take advantage of cheap Jewish labor and confiscated property. In January 1940 he acquired a Jewish-owned business that made enamel kitchenware and renamed it the Deutsche Emalwarenfabrik Oskar Schindler. It came to be known as Emalia. The factory was located at the edge of what would become the ghetto. Schindler employed Jews at the factory because they were much cheaper than Polish laborers, but his reasons for taking in more such workers evolved.

In the spring of 1942, the SS began to deport Jews from the Krakow ghetto. Schindler witnessed the brutality and bloodshed of the deportations and decided that he would do what he could to save his Jewish workers. That summer the Germans established the Plaszow slave labor camp near the ghetto. Jews as well as Polish prisoners were sent there to work in factories. In March 1943 the Germans emptied the ghetto, sending more than 2,000 inhabitants to Auschwitz. The remaining Jews were sent to Plaszow. Learning of the Germans’ plans for the liquidation of the ghetto, Schindler told his employees to stay at Emalia until the Aktion was over.

The violence of the liquidation and the worsening conditions at Plaszow led Schindler to take additional steps to protect his workers. He told Amon Göth, the commandant of Plaszow, that he wanted to transform Emalia into a sub-camp of Plaszow, complete with barracks for his Jewish workers. Göth agreed to the idea, in part because Schindler bribed him. The first transfer of Jews to the sub-camp took place in May 1943. By the summer of 1944, more than 1,000 Jews lived there. Schindler treated the workers relatively well and provided extra food rations that he bought on the black market.

As Soviet troops approached Krakow, Schindler was ordered to break up the Jewish sub-camp at Emalia. The workers were to be sent back to Plaszow and then to other camps or killing centers. Schindler asked permission to set up a new armaments factory in Brünnlitz, located in German-occupied Czechoslovakia. He then arranged for nearly 1,100 Jews from Plaszow, some of whom had worked at Emalia, to be transferred to the new factory. On this list, he claimed, were “indispensable” workers. In the fall of 1944, the Jews were brought to the factory in Brünnlitz. The men were transferred from Gross-Rosen, and the women from Auschwitz. The Jews remained in Brünnlitz until the area was liberated by the Soviet army in May 1945.

After the war, Oskar Schindler escaped to the West. He died in October 1974 at the age of 66 and is buried in the Catholic cemetery in Jerusalem.