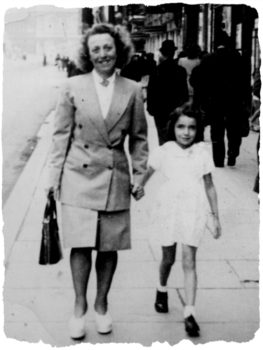 Anzegem, Belgium…June 1942 – Stefka and Hubert Kollmann and their two daughters, Inge and Lydia, lived in Brussels during the war. They were good friends with their neighbor, Lydia Wegielski. In 1942, it became very dangerous for the Jews of Belgium. The Germans required them to wear the yellow star of David, rounded up many for forced labor, and began deporting them to Auschwitz. Lydia Wegielski’s cousin, Alice Schiffer, came to visit from the countryside. During the visit, Lydia suggested to Alice that she take Inge and Lydia Kollmann with her when she returned home. Despite the danger, Alice agreed to take the children to her small village of Anzegem.

Alice cared for the children from June 1942 until the end of the year. Alice adopted the children and had them baptized, enabling them to be placed in a convent where they would be safe. Alice continued to look after the girls for the entire time they were in the convent.

Inge and Lydia’s parents remained in Brussels. During a raid of the apartment, Hubert Kollmann was captured by the Gestapo and deported to Auschwitz, where he died in 1942. Stefka Kollmann was hidden by Lydia Wegielski. Inge and Lydia survived the war.