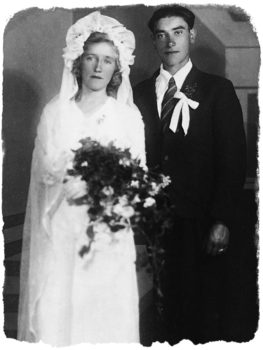 Malwina Sawka with her husband on their wedding day

Podhajce, Poland… June 1943 – Toni and Israel Friedman, their three daughters, and Israel’s father were forced out of their home in Zlotniki and herded into the Podhajce ghetto. There was no food to be found in the ghetto. Israel bribed a German officer to give him and his daughter, Berta, a four-day pass to go to the countryside to buy food. They went back to their old neighborhood and stayed with their friends, Malwina and her parents, Jozef and Antonina Sawko.

Israel had made an arrangement with a local farmer to be picked up so they could return to the ghetto. The farmer never arrived. Israel and Berta stayed in the fields that night. The next day they learned that the ghetto had been liquidated. Berta and her father had lost their entire family.

Since they had not planned to go into hiding, Berta and Israel had not taken anything with them. They had no money, clothes, or papers. Knowing that everyone had been killed, and feeling they were doomed, they decided to commit suicide. They obtained a prescription for poison from a Jewish doctor whom the Germans had let remain in the area. They asked Malwina to fill the prescription; she refused.

They hid in the fields during the summer rather than stay with Malwina. Berta and Israel feared that the Sawko family would be taken by the Germans for aiding Jews. Malwina and Antonina brought Berta and her father food every Sunday.

In September, when it began to get cold and the fields no longer provided protection, they moved to the Sawko farm and lived in their haystack until November. When the weather became much worse, they dug a small hole under the cows. The hole, which was covered with some straw and wood, only allowed them to sit up. When it rained, they were often sitting in waist-high water.

In February 1944, the Soviet army liberated their area. Berta and Israel fled from their hiding place in the middle of the night, so no one would know that Malwina and her family had given them food and shelter. They never returned to Zlotniki.

Antonina and Jozef Sawko died many years ago. Malwina Sawka passed away in 2005. She was 79 years old.