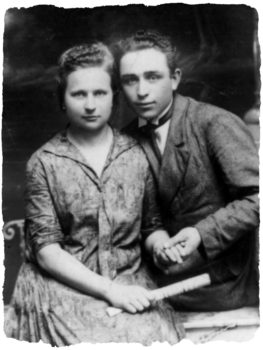 Navininky, Lithuania… Winter 1942 – Early one morning, Kastute encountered an exhausted Jewish family on the edge of the woods. Kastute had come upon Samuel Feldbergas, his wife and daughters, Ada and Ruta. They were sick, cold, hungry, and tired. They had escaped the German roundup of the Jews in their small village and were seeking shelter.

Kastute took the Feldbergas family to her home and fed them. She and her husband decided to take in the family. Because Vincas and Kastute lived in a two-room house, they found another Lithuanian family to take care of Ada. Unfortunately Ada fell sick and died.

For three years, Vincas and Kastute gave Samuel and his family shelter. They survived several raids by the Germans.

Kastute Savickas died many years ago. Until his death in 1997, Vincas Savickas lived in the same home in Navininky where he had hid the Feldbergas family.