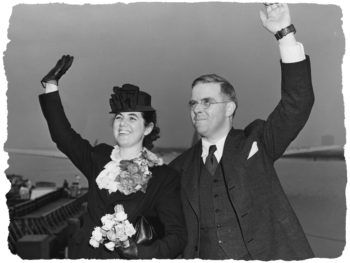 Marseilles, France… Summer 1940 – After the signing of the Munich Pact at the end of September 1938, Unitarians in the U.S., who had close ties to churches in Czechoslovakia, were alarmed by the increasing number of Jews, political dissidents, and other refugees seeking help from the Unitarian church in Prague (now the Czech Republic).  Shortly thereafter, the American Unitarian Association (AUA) allocated more than $40,000 to support the newly formed Commission for Service in Czechoslovakia. The AUA selected the Reverend Waitstill Sharp, a young minister from the Wellesley Hills Unitarian Church in Massachusetts, and his wife, Martha, an experienced social worker, to oversee the enterprise.

The Sharps accepted the mission and left their two young children in the care of close friends.  On February 4, 1939, they set sail for Europe.  Throughout the six years they continued their rescue work, the Sharps engaged in both direct relief and emigration assistance, often focusing on individual cases, many of whom were Jews.

On the night of March 14-15, 1939, just before the Germans entered Prague, the Sharps burned the notes they had compiled.  The Gestapo closed down their office at the end of July.  Waitstill and Martha returned to the United States shortly thereafter.

In May 1940 the Sharps returned to Europe to establish an office in Paris, but the German invasion of France forced them to open the first Unitarian Service Committee office in Portugal, a neutral country.  Another office was opened in Marseilles, France.  The Sharps also worked closely with Varian Fry, an American who was a representative of the newly formed Emergency Rescue Committee.

The Sharps helped the German Jewish novelist Lion Feuchtwanger escape from Vichy France to Portugal.  Waitstill sailed with Feuchtwanger and his wife, Marta, to New York; Martha Sharp gave up her ticket to ensure that the Feuchtwangers could leave Europe.

On one occasion, Martha Sharp battled numerous bureaucracies to secure exit visas, transit permits, and identity papers for twenty-nine children and ten adults to leave Vichy France.  She managed to get the children across the French border to Spain and then into Portugal.  One of the Jewish children was fourteen-year-old Eva Feigl, who still remembers arriving at the port of New York on December 23, 1940, and seeing Martha Sharp there at the dock to meet them.

Waitstill Sharp passed away in 1984 and Martha Sharp in 1999.  Martha and Waitstill Sharp are the second and third Americans to be recognized by Yad Vashem as Righteous Among the Nations.