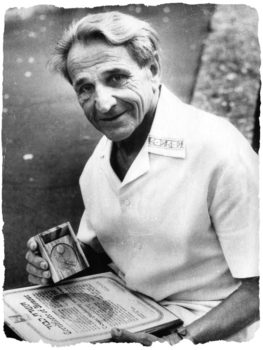 Drogobich, Ukraine… 1941 – The first anti-Jewish action took place in Drogobich in 1941.  The Germans went from house to house rounding up and killing Jews.  Taras Shniatinsky and his mother saved their neighbors, Rosa Nestl and her two small daughters.  Taras hid and cared for them in his small apartment.  When it became too dangerous to stay there, he brought them to his sister’s house.

But soon they had to leave his sister’s home.  Taras then took them to his friend Andrej’s home, where they were hidden in a shed.  They stayed with Andrej until the end of the war.  Once a week Taras brought them food and hope.

When the area was liberated by the Russians, Taras and Andrej were sent to a labor camp in Siberia, where they remained for 10 years.  Andrej died in the Gulag.  Taras Shniatinsky died in 1995 at the age of 70.