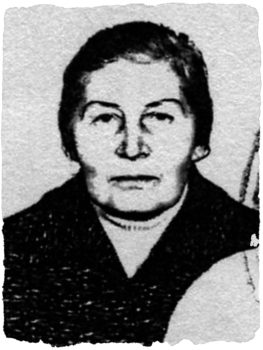 Kiev, Ukraine… September 1941 – When the Germans occupied Kiev on September 19, 1941, Dariya Shutenko fled the city with her two daughters, Taisia and Valentina. They headed for Trushki, the village where Dariya’s mother, Matriona Romich, and step-father, Ivan Romich, lived. Upon leaving Kiev, they met a Jewish woman, Berta Mosyakina, and her five-year-old daughter, Ada.  Berta approached the women and asked if they would shelter her and Ada. They agreed and took Berta and Ada with them to Trushki. When they arrived at the Romich home, Berta was hidden in a hay stack in the barn during the day and moved into the house at night. Ada lived in the home and was presented as their orphaned niece.

Dariya’s husband, Vladimir Shutenko, was a commissar in a Soviet partisan battalion and was the secretary of the Communist Party’s underground committee in the area. Dariya also worked with the Communist underground acting as liaison to the battalion. On August 8, 1943, Dariya and Vladimir’s anti-German work was discovered.

German agents set fire to the home, killing Dariya’s mother, Matriona. Taisia, Valentina, and Ada were out of the house at the time. Their neighbors, Nikolay Kravchenko and Sofia Patsenko, told Dariya and Vladimir that the Germans had burned their home. Dariya and Vladimir told Nikolay and Sofia that Berta was hiding in the barn. Nikolay and Sofia rushed to the barn where they found Berta.  She was unharmed and was reunited with Ada.

With the home they were hiding in destroyed, Sofia Patsenko agreed to hide Berta and Ada. They remained there until the area was liberated on January 1, 1944. Taisia and Valentina survived the war. Caught and convicted for their anti-German activity, Dariya Shutenko and her step-father, Ivan Romich, were buried alive by the Germans.

Taisia Shutenko passed away in March 2020.