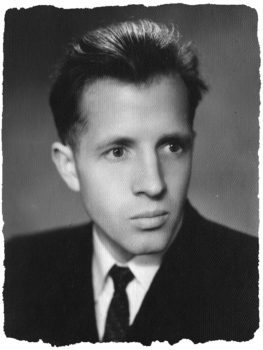 Liciskenai, Lithuania… March 1944 – Avraham Kvartovsky, his wife, and their infant daughter, Dora, were forced into the Kovno ghetto in 1941. When rumors began to spread in March 1944 about an impending Children’s Aktion, Avraham asked his friend Juozas Talacka for help in saving his three-year-old daughter.  Juozas smuggled Dora out of the ghetto and took her to the home of his brother, Simonas Talacka.  Simonas was a poor farmer who lived with his wife, Ona, and their children, the oldest of whom was thirteen-year-old Mykolas.  They lived in the village of Liciskenai outside of Kovno.

Despite the dangers involved with helping Jews, the Talacka family welcomed Dora into their home.  Mykolas was responsible for keeping Dora hidden from their neighbors.  He kept her company and would often read to her.  Because of Mykolas and his family, Dora survived the war.  Dora stayed with the Talacka family until 1946, when she was reunited with her mother.  Later Dora and her mother immigrated to Israel.

Juozas, Simonas, and Ona passed away years ago. Mykolas died in 2013.