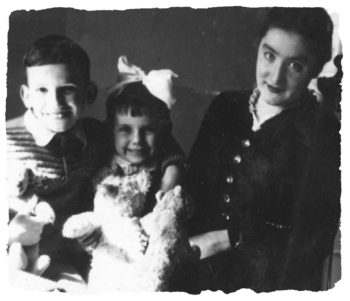 Warsaw, Poland…  1942 – Before World War II, Wladyslaw and Jadwiga Szymanski and their children, Bogdan and Krystyna, lived in the Zoliborz district of Warsaw.  Wladyslaw was a Lieutenant Colonel in the Polish Home Army and an employee of the General Inspectorate of the Armed Forces. In 1935, he retired and accepted the position of technical director in the “Jan Serkowski and Co.” factory on Nowolipie Street. In October 1940, the premises of the factory was incorporated into the newly established Warsaw ghetto.

Jadwiga’s relatives from Czestochowa asked Wladyslaw to help their friend, Ewa Zelkowitz, who had been deported to Warsaw.  Wladyslaw agreed immediately.  As Ewa wrote in her testimony to Yad Vashem, “I was a friend of his wife’s brother and sister-in-law, and that was a sufficient cause.”  Wladyslaw obtained Aryan papers for Ewa in the name of Bronislawa Morczak. They were the legitimate papers of a friend of Wladyslaw’s daughter who had passed away. Due to her so called “proper appearance,” Ewa did not look like a person of Jewish origin, she was initially employed by the Szymanski family as a babysitter for the Szymanski children, Bogdan and his sister, Krystyna, and Eva lived with them in their home. Later, Ewa hid in the Wola district, and kept in contact with the family.

The Szymanski family also rescued the well-known translator and theater journalist, Jacek Fruhling. He stayed with the family for a short time.  Fruhling had characteristic Semitic features requiring him to frequently change where he stayed. The Szymanski family gave him temporary shelter and provided him with food and clothes. The family also helped many other Jews. In his interview for the Museum of the History of Polish Jews, Bogdan Szymanski recalls: “I don’t remember those people’s names; I merely recollect their faces, handshakes, pats on the back, countenances lit up with gratitude and joy. This was the greatest reward.”  When hiding Jews in their home, Bogdan would stand guard should a neighbor come by.

Wladyslaw and Jadwiga died years ago.  Bogdan died on February 28, 2022.