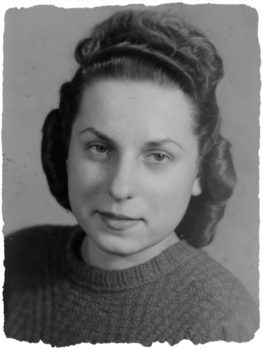 Lvov, Poland… December 1941 – When the Germans invaded the Soviet Union in June 1941, they also entered the territory in eastern Poland that the Soviets had annexed two years earlier. The Germans occupied the city of Lvov (now Ukraine) on June 30 and began murdering Jews that day. Eight-year-old Ruth Gamzer and her parents, Barbara and Isaac, were among the city’s Jewish residents. At the beginning of July 1941, mobs of Ukrainian nationalists launched pogroms against the Jews and murdered thousands. In the following months, the violence escalated, and the Germans passed a series of anti-Jewish measures.

When the Germans ordered the establishment of a ghetto on November 8, 1941, the Gamzers knew that their situation was dire. Deportations were underway, and children were among those targeted. They needed to find a place for Ruth to hide. Isaac Gamzer was considered a useful worker and was assigned to a job outside of the ghetto. Shortly after the family was forced to move to the ghetto, Isaac bumped into a friend, Irena Szczygiel, on his way to work. Before the war, the Gamzers owned a candy store, and the Szczygiels – Irena, her husband, Boleslav, and their three teenage daughters, Joanna, Maria, and Helena – were regular customers. Irena told Isaac that she would shelter Ruth in her home, an offer that he gladly accepted.

Isaac smuggled Ruth out of the ghetto by hiding her under his overcoat as he walked to work one December morning. A friend from Isaac’s work detail helped with the dangerous maneuver by walking shoulder to shoulder with Isaac, Ruth sandwiched between them, clinging to her father’s leg. Isaac brought Ruth to his office and hid her in a room. Irena came for her the next day. The Szczygiels prepared a hiding place for Ruth under a bed. They told her not to speak above a whisper and to stay away from the windows. Eighteen-year-old Joanna Szczygiel, the oldest of the three sisters, took care of Ruth on a daily basis. She bathed the young girl, combed her hair, and taught her how to read and write. There were several close calls during the eight months that Ruth hid in the Szczygiel home. Both Helena and Maria had boyfriends who supported the Germans, and both almost discovered Ruth in the apartment.

Irena Szczygiel put Ruth in a new hiding spot, a box in the kitchen, which seemed to be safer than under the bed. The danger of being denounced remained, however, and the family feared for their lives. Irena brought Ruth to the Ojaks, where Isaac and Barbara Gamzer had been hiding. The Ojaks were a Christian couple who had worked at the Gamzers’ candy store, and the Szczygiels and Ojaks knew each other from the store. Ruth was overjoyed to see her parents after eight months with the Szczygiels. Mr. Ojak was reluctant at first to take her in, but decided to do so after he saw the emotional reunion between the Gamzers and their daughter. The three of them hid in the Ojak home for two years, until Lvov was liberated by the Soviet army in July 1944. Joanna Szczygiel continued to help by bringing food to the Ojak and Gamzer families.

Ruth and her parents were the only survivors from their family; more than 300 were killed. Joanna Szczygiel died in February 2014.

The JFR reunited Joanna Szczygiel and Ruth Gamzer in 2005. A documentary of their story can be viewed here.