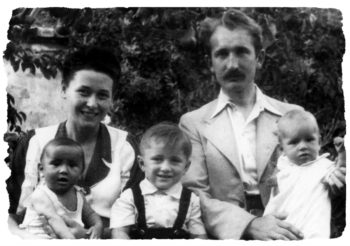 Subotica, Hungary… April 1944 – Laszlo and Julia Szagmeiszter were living in Subotica, Hungary (now Serbia) with their children when Germany invaded Hungary in March 1944.  Throughout Hungary Jews were forced into ghettos and the Hungarian government began deporting the Jews from small towns and villages to Auschwitz.

In April 1944, the 3,000 Jews of Subotica were confined to the ghetto.  Weeks later, in May, Laszlo and Julia were asked to care for a Jewish infant, Amir Engler.  This was a task they took up without any hesitation.  The Szagmeiszters called him “Pali” and cared for him as though he was their own son.  Julia had given birth to their son Alexander in February 1944, the same month that Amir was born. Therefore, Laszlo and Julia raised the two boys as “twins”.

Magda Engler, Pali’s mother, was able to visit her baby at the Szagmeiszter home every day until the Subotica ghetto was evacuated and all of its inhabitants were transferred to the Bacsalmas collecting camp in June 1944, where Jews were concentrated before being deported to Auschwitz.  Because someone denounced the Szagmeiszters for hiding a Jewish child, Pali was also taken away. Laszlo learned that Magda and Pali had been deported to Bacsalmas along with the Jews of Subotica.

Immediately, Laszlo began adoption proceedings for Pali.  Hoping to retrieve the child, Laszlo drove with a taxi driver friend to Bacsalmas, carrying papers that showed that Pali’s father had agreed to let Laszlo adopt him. Now Laszlo only needed Magda’s approval.  After convincing the guards to allow him into the camp, Laszlo found Magda and secured her approval.  After bribing the guards, Laszlo was permitted to leave the camp with Pali. The prisoners of the Bacsalmas collecting camp were deported on June 26, 1944. Some were taken to Auschwitz; the others were deported to the Strasshof labor camp in Austria.

Pali was raised by the Szagmeiszter family as one of their own, sharing everything with his “twin” Alexander. Pali believed that Julia and Laszlo were his parents.  Miraculously, both Pali’s parents survived the camps. Magda Engler returned to the Szagmeiszters to retrieve her son, but she was extremely weak. The Szagmeisters continued to care for Pali until his parents were able to do so themselves.